Forty years after the Summer of Love

Ed Visser and Arno Rollenberg noticed a great interest for all forms of psychedelic art. They did some research and went to a lot of effort to resurrect a number of old projectors and other necessities, such as the colored liquids. They were instructed and advised by Wonderland Lightshow artists and regained experience themselves with a number of public shows. In Ed’s studio they installed the projectors and made many slides and digitally recorded the projected images. They manipulated them on an Apple computer into a fascinating production:

The Art of Liquid Light on DVD!

Fifty years after the Summer of Love

Fifty years after the Summer of Love there is even a bigger interest for all forms of psychedelic art. Ed & Arno started to work again in there studio with old & new liquids, projectors and a 4-K camera. Some images were manipulated on an Apple computer and also they kept original Liquid Light without manipulation. They made it into a fascinating production: UCVisuals, a digital TV station for Psychedelic art, stream-beam-screen! See the video’s here…

Ed Visser’s first encounter with a liquid light show was at a Pink Floyd concert in Holland, in a local church hall on Ascension Day on May 23, 1968. A hallucinating experience that started his interest in this art form. Arno Rollenberg became acquainted a little later, at a party in 1985. He was so immediately fascinated, that he used the inheritance from his grandmother to buy half the Wonderland Lightshow. At that time one of the few still existing liquid lightshows in Holland. 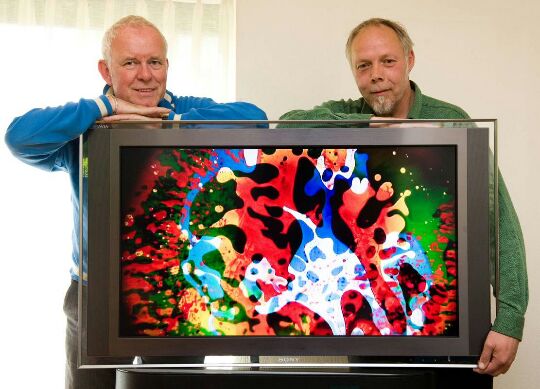